SpearNode is a plugin built exclusively for SHADERed. It adds the ability to create shaders with node graphs. It consists of around ~130 nodes but can be expanded with custom built node libraries. Nodes are based on Unity's Shader Graph. It also supports debugging and exporting to HLSL, GLSL, SPIR-V and Unity's Shader Graph. 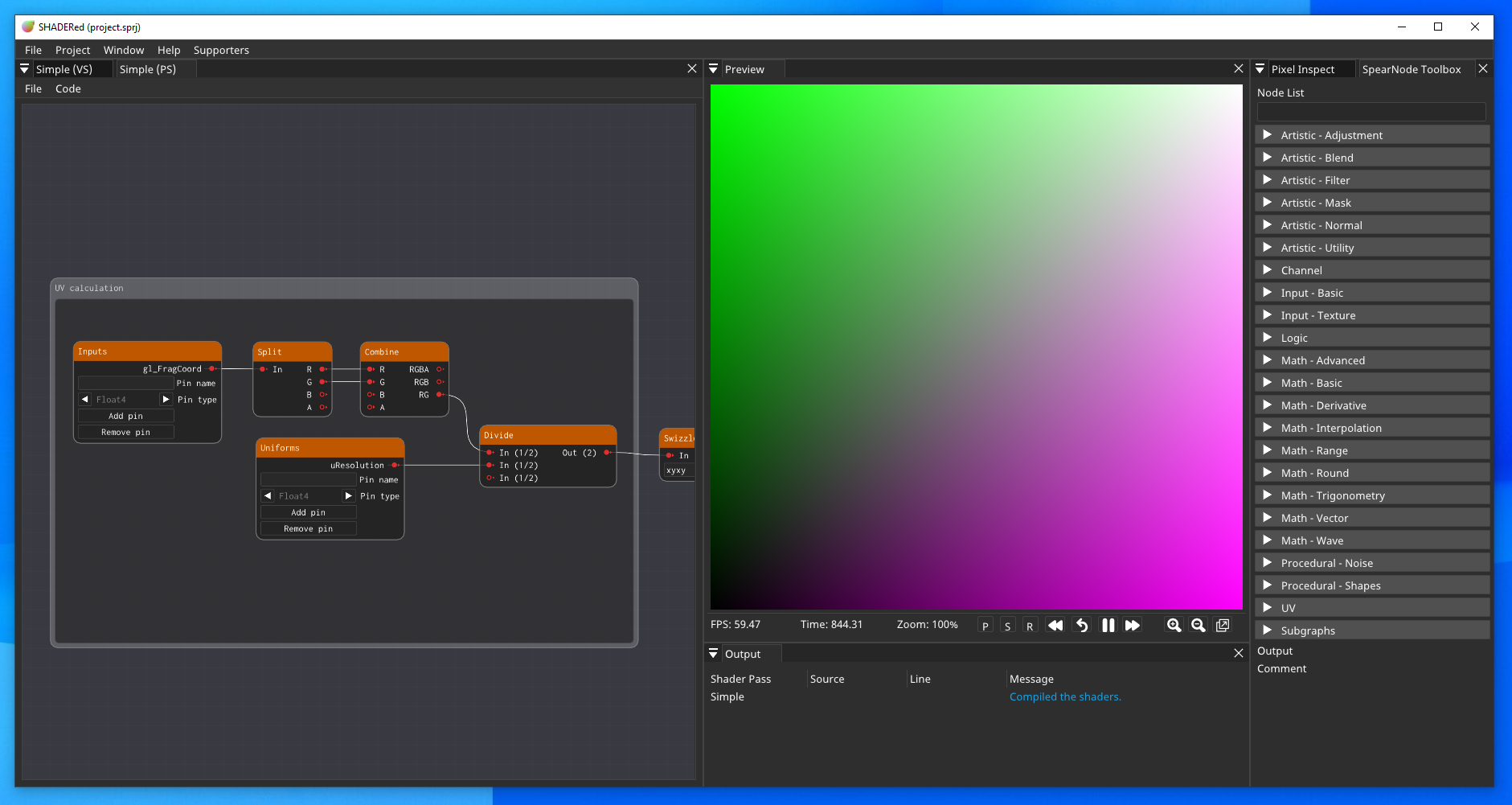 You can show the output of a node it has a float/vector of floats pin. 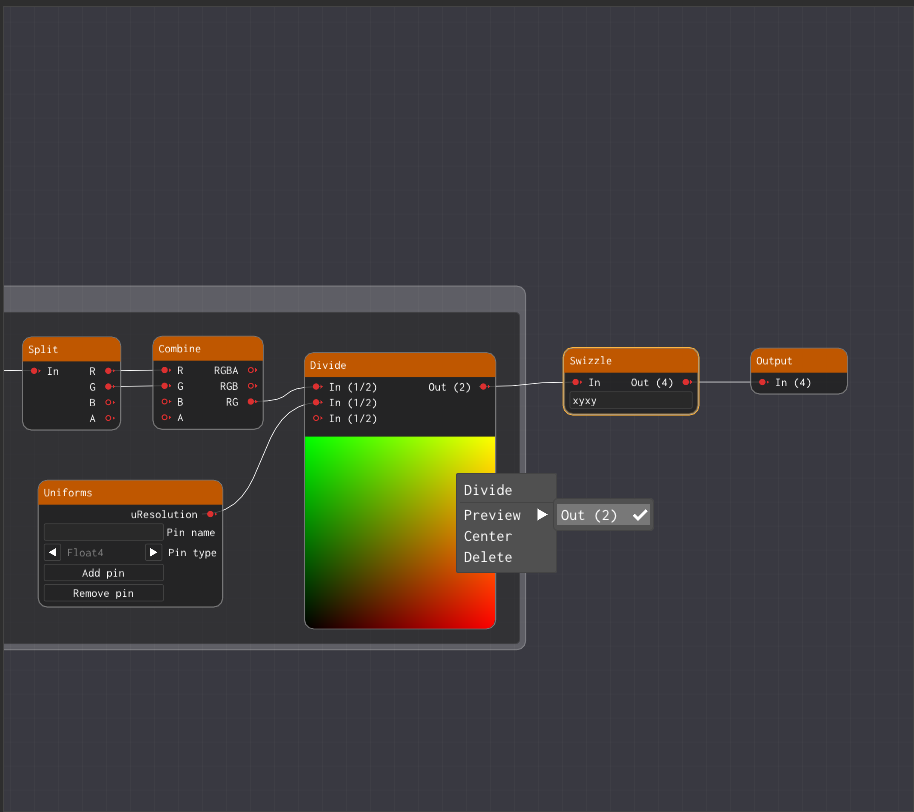 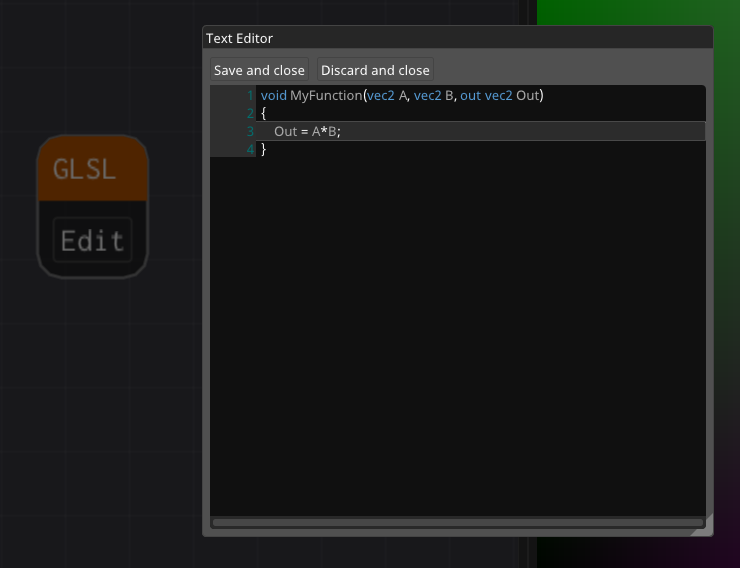 After you enter your code, SHADERed will automatically create all the pins. The limitation of the GLSL node is that it must have only one function.

You can create a 'subgraph' if you want to reuse part of the node graph in other places. 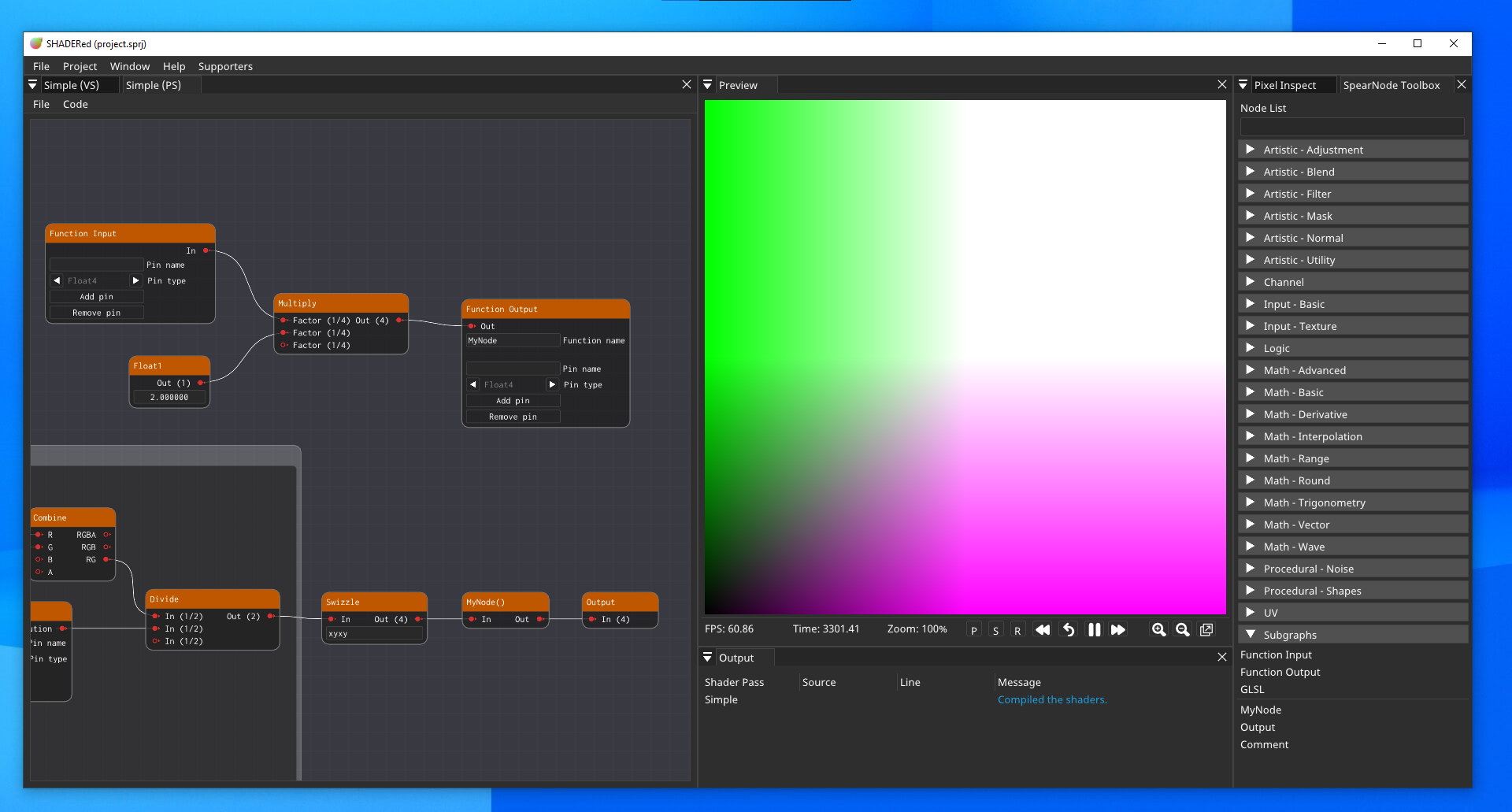 SpearNode supports custom nodes. To create a node library, add a JSON formatted .spearlib file to the nodes directory. Each custom node must have the group defined (this is where your node will appear in the toolbox, you can add nodes to already existing groups), the name is the name of the node that will show up in the toolbox, code is GLSL code that contains your function that the node should execute, function_name is the name of the function to be executed (since you can have multiple functions defined in the code section)

It wouldn't be a SHADERed addon without it supporting debugging -- SpearNode also supports debugging. SpearNode might be the first and only node based shader editor to support debugging. To debug your SpearNode shaders, pause the preview and select a pixel, then click the "play" button next to the fragment color in the Pixel inspect window (check out this YouTube video ). Once the debugger starts, "Step" and "Stop" buttons will appear at the bottom of the canvas. Press "Step" to go to the next node. Above each executed node you'll be able to see the value output by each pin. You can also see the 'flow' of the graph with a nice smooth animation.

Right click on your shader editor and click the "Export to Unity ShaderGraph" option. This is a very experimental feature. There's a 99% chance that the exported shader won't function properly. Most of the properties and node values (like the Blend type) aren't currently exported... But it should hopefully ease the porting (rather than trying to recreate the whole shader again). I will update this feature to make it more complete.

To install SpearNode, first you have to have at least SHADERed v1.5.5 installed. SpearNode doesn't work with older version of SHADERed. After you've installed SHADERed, you can install the plugin:

To create and use a SpearNode shader, you just need to provide a .spear file to a shader pass item in the pipeline window. SpearNode currently only supports fragment shaders. To have instant preview of your shaders (rather than having to press CTRL+S each time), go to Windows → Options → General → turn on the Recompile shader on content change option. Controls:

To hide or show the "Toolbox" window, go to Windows and click on the SpearNode toolbox. To export your shaders as HLSL/GLSL, click on the File menu inside of the editor and than choose the language: 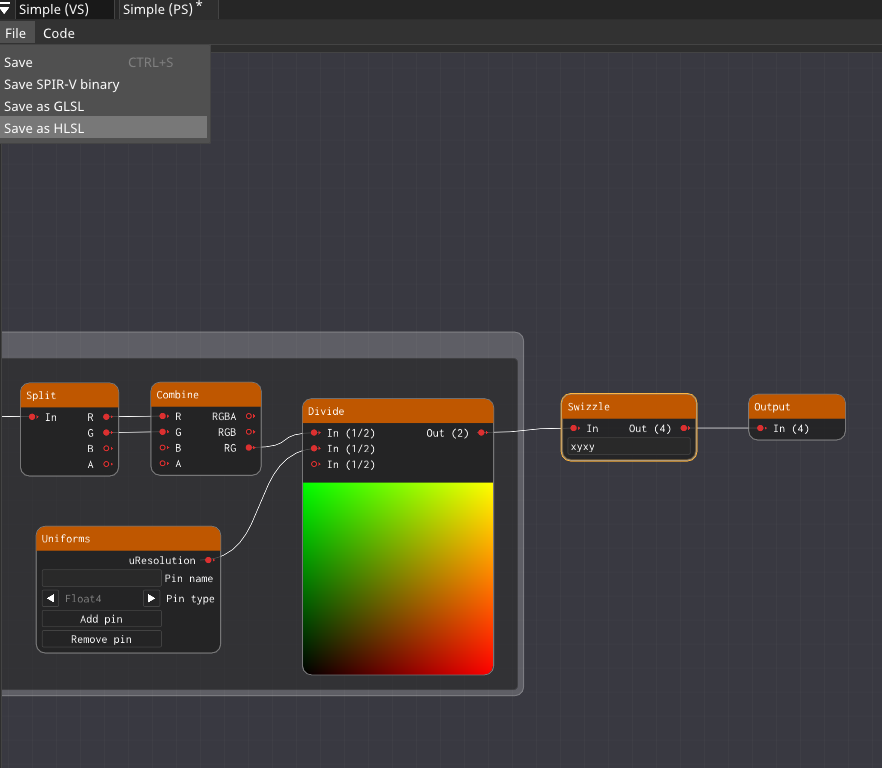 I've been working on this project for a long time now and wanted to release it already, but as I have less and less time to work on personal projects lately, this project lacks some features and might be buggy in some places. Here's a list of some bugs/limitations that I am aware of:

First, huge thanks to SiNGUL4RiTY for creating SpvGenTwo and the linker. Without it, it would take me ages to create SpearNode. If you want an amazing library to play with SPIR-V, check out:

. And thanks to thedmd for creating the C++ node library being used in SpearNode: imgui-node-editor

In the next few months I will be mostly fixing bugs and recoding SHADERed. The code there is terrible in some places, I've rushed some of the features and the build times are super long. So unfortunately, nothing exciting will be released for SHADERed this year. Though, I will most likely release a SpearNode update to fix these bugs/limitations.

If you or your company uses (and/or likes) SHADERed, please do consider sponsoring the project as SHADERed is completely free & open-source.

Thank you so much for all the support throughout the years (SHADERed turned 2 few months ago!) and many thanks to my patreons.